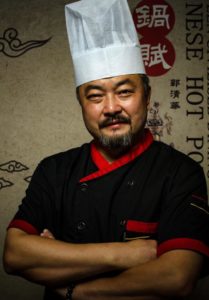 Hailed from Sichuan, where it is known for its long history of pungent and spicy food, Chef Huang graduated from a top Chinese culinary school and was a renowned teacher specializing in contemporary Sichuan cuisine before becoming a very successful chef and restaurateur in China.

When Chef Huang first came to Connecticut, he was surprised to find out that authentic Sichuan cuisine was very rare to find.

He set out to bring the most authentic delicacy from his home town to the locals. In a span of less than four years, he achieved something far beyond what he initially envisioned. He opened four restaurants in quick successions and they quickly became the local favorites.

While serving the customers in his restaurant, Chef Huang noticed that many customers liked the sauces so much that they took the leftover sauces home so they could continue enjoying the flavors when cooking at home.

He started to think why not create a series of sauces and recipes from the most popular dishes and make them available for people to buy at local stores and use them at their own dining table.

With this idea Chef Huang co-founded Tasty Shu and started to develop a series of sauces that can be used with dumplings, salads, pastas and stir-fry.